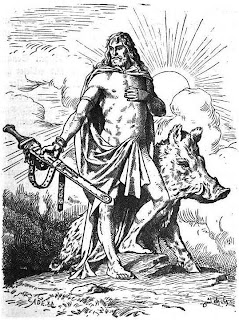 Not really. It is his twin's day based on the Romans' calling the fifth day of the week 'dies Veneris' which in the Norse Pantheon would mean Friday is Freya's day. Or Frigg. The Oxford English Dictionary voted in favor of Frigg. Brewer's Guide is sitting on the fence but adds that Friday was considered a lucky day of the week for the Norse and was when weddings took place.
If you ignore the Romans, this could just as easily be Freyr's day since Tuesday (Tiw), Wednesday (Woden), Thursday (Thor), and Saturday (Saturn) are all named for male gods. If Friday was named for a goddess that would make it unique unless you count the sun or the moon's day. In Norse, the sun is a goddess; to the Romans the moon is a goddess. The Northern gods seem to have been selected for those days where their character resembles a Roman god. Some one decided that Woden was like Mercury, but that is another topic.
Freyr(lord) is one of the Vanir. He came over to the Aesir after the war, possibly in an exchange of hostages. He, his father Njord, and his sister, Freya(lady) dwelt among the Aesir and are counted as one of their number. He will be at Ragnarok in the final battle between the gods and the giants but Freyr will die, killed by Surt, a fire giant, because Freyr lost his magic sword when he lost his heart to Gerd.
Freyr is a fertility god. He presides over rain and sunshine; he is kind to men. His father Njord, presides over the wind and sea, and Freya over love and sex. Freyr has a golden boar called Gullinborsti (Golden-Bristles) which pulls his chariot. Unfortunately, the sources that remain do not say who will avenge Freyr and what happens to Surt after he destroys the earth with fire. So Freya or Freyr, since they are two sides to the same coin really, could share the day. Frigg could kick Saturn out and take Saturday. Would not a week with two Fridays be fun?
Posted by The Red Witch at 7:53 AM

I thought Freya was Venus?

Think I'd rather have two Saturdays than two Fridays in a week.

Freya was Venus. Which is why she probably got Friday as her day.
Friday is one of those transition days. Anything could happen. Once Saturday is here, the weekend is already a done deal.