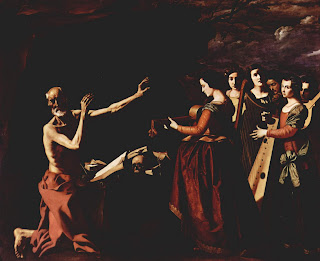 I was going to write something about Old Norse but a post by The Plashing Vole that September 30 is the feast day of St. Jerome, patron saint of translators, librarians and students made me change my mind. I usually avoid blogging about men like St. Jerome because I have a hard time saying anything nice about them. Why do dried up old prunes like St. Bernard become saints when a truly nice guy like Peter the Venerable does not? I am hoping it is merely because the name St. Peter was already taken because it would be a shame if, in the church, nice guys finish last.
So I am already lumping St. Jerome with St. Bernard. Bad sign. Jerome did write the Vulgate Bible which became the accepted version of the Bible for the Catholic Church. It was a flawed translation and I have read suggestions that he borrowed heavily from other translators. It was he that started The Gospel of John with "In principium verbum erat." In the beginning was the word. The Greek word was 'logos' which can be a 'word' but means so much more such as 'rational mind'. It is the root word for 'logical'. The Greeks had a different word for 'word' - lexis.
Jerome was born in Dalmatia and moved to Rome for his studies. He had a bad temper and was a bit of a whore. All that whoring around left him feeling empty and hollow, as it should, and so he wandered off to the deserts of Syria to find himself. The desert, at that time, was a crowded place because everyone had the same idea of creating a living martyrdom for themselves in self denial. He spent several years in the desert trying to rid himself of his sexual desires. It was a hard fight. Not sure he won either, as the above painting by Francisco de Zurbaran, copied from Wikipedia, shows.
He eventually returned to Rome acquired a reputation as a religious superstar and accumulated a few groupies, one of whom died following his orders to her for leading a more ascetic life. For that he was run out of town. As Clifford Bachman writes : "Another legacy was Jerome's intense misogyny. He was hardly the first person to teach the evils of Woman as seductress, but he was one of the most vocal and vitriolic. His pronouncements are indeed harsh but are generally aimed more at sexuality itself than at the female sex in particular." So, if you feel like observing this feast day, I suggest a few beers and a romp in the sack. Phooeeey to St. Jerome.
Posted by The Red Witch at 8:39 AM

I prefer this version of St.Jerome's trials:

The Greek word was 'logos' which can be a 'word' but means so much more such as 'rational mind'.
It is the root word for 'logical'. The Greeks had a different word for 'word' - lexis.

In the Beginning was the Rational Mind certainly sounds much more logical.

I suggest a few beers and a romp in the sack.
LOL - I didn't realise I was observing St Jerome's feast day last night! (Glad I didn't - kind of off-putting really)

I think I would have derived some satisfaction from that Tracy. But well done.
I meant to be kinder to Jerome and try to be positive about his accomplishments but I started foaming at the mouth. The effort was too great. I chose the painting for the dancing girls of Rome. It's not their fault he had no self control.

I simply like Bosch as a painter better than Zurbaran ;) I am not surprised you started foaming at the mouth. Most medieval saints have that effect on me. ;)

It's the usual story, isn't it - always blame the woman, because, of course, men are completely blameless.