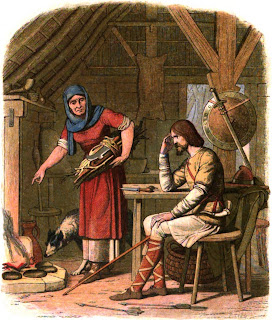 A few days ago, I was in the grocery store and spotted some Eccles cakes which I brought. Yum. It does not take much to get me wondering why these are associated with Easter and were these the cakes that King Alfred the Great is rumoured to have burned at Athelney?
In 879 around Easter, Alfred was hiding in the swamps of Somerset with a small remnant of his army. This is written by Alfred's biographer Asser. Asser does not mention any cakes, he does not even mention Alfred lodging with any peasants who fail to recognize their king. The story appears later in the Vita Prima Sancti Neoti. It is disputed if Neot was related to Alfred or not. It seems unlikely as his name is said to be Cornish and Alfred left nothing to Glastonbury where he is said to have visited Neot, but Asser also wrote that he was related to the king.
The story goes that while Alfred was in the Somerset swamps (or wetlands as some might prefer) he received a lesson in humility from the saint. Alfred had three older brothers and was never expected to gain the throne, hence the 'Alf' prefix to his name (which means elf-counsel) rather than 'Aethel' (meaning prince) like his brothers. His brothers all died fighting the Vikings, yet the clerics, Asser included, stated that the attacks by the Vikings, slaughter of people with no regard to age except those that were sellable as slaves were taken and sold, was all due to Alfred being a sinner. Could Alfred not have been afflicted with leprosy or something instead? The Vikings had been harassing England since before Alfred was born, how awful to blame his failures at battle on God being not pleased with him. As it was Alfred suffered from ill health ( said to possibly be Crohn's Disease) but he did his best to preserve his people. If Neot had been son of the King of Kent, then he was not any more successful in repelling Viking attacks in spite of his holiness.
While he was hiding in Somerset, St. Neot's Life says that he took shelter in the hut of a swineherd, being alone and without his men. One day, while the swineherd was tending his swine, and his wife was busy tending to domestic chores, she asked Alfred to keep an eye on the loafs (not cakes) that were in the oven. Alfred, who was a little pre-0ccupied, was deep in thought and did not notice the loafs were starting to burn. The housewife came back and chided him saying that he has no interest in tending them but he probably has no such difficulty in eating them. After which he recognized this as a duty sent to him by God and he tended the loafs with much diligence after that. When he left the swamps, after learning his lesson, he rallied the English and scored a decisive victory against the Vikings at the Battle of Ethandun.
The Vita Prima Sancti Neoti was written 100-150 years after the events had taken place. The incident it reports also resembles the trials of Marius (Julius Caesar's uncle) at Mintunae when he was fleeing from Sulla. However it made its way into Asser's Life of Alfred in 1574, when the Archbishop of Canterbury, Matthew Parker, inserted it into the first printing of Asser's book. The story took hold and has been repeated ever since. It is a lovely story. If you eat any cake or loafs over the Easter Weekend, have a thought for poor Alfred and all the difficulties he endured. He was a fellow lover of books.
the above image is courtesy of Wikicommons
Here is a nice history on the Eccles cake by the Salford Town Council.
Posted by The Red Witch at 7:49 AM

There is a St Neot in Cornwall, so that certainly sounds right.

It seems a shame that the one thing everyone remembers about Alfred is that he was the one who burnt the cakes. He certainly loved books, translating several from latin to English. I'm just reading a very brief book on Anglo Saxon history at the moment - the conclusion on Alfred is 'he remains the outstanding figure of early English history'.

But he didn't burn the cakes. When I saw St. Neot had been at Glastonbury, I took a look in Prof. Carley's book and he wrote about Alfred's visit to Glastonbury. He is one of the sceptics that Alfred and Neot were related. But Neot did become a hermit on Bodmin Moor after he left Glastonbury.
Alfred was a great man. Too bad he couldn't have had a few moments of peace, he deserved it.

No, but it's something everyone remembers about Alfred, whether it's true or not, as is often the case.