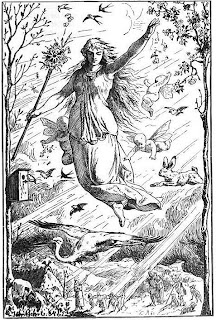 Eastre or Ostara was an Anglo Saxon or Germanic goddess of the rising sun. She was only mentioned once by any writer and he was the Venerable Bede in De Temporum Ratione. Since the Bede does not have a sense of humor and he hates heretics and heathens, if he mentioned her worship, then she had to have been real.
She gave her name to Easter in the countries where the Germanic languages rule, otherwise people followed the Biblical word for it, 'pascha'. Easter is Pacques in French.
Grimm stated that she seemed to have a male counterpart in the Norse Eddas, Austri, but that Easter was not his feast. They seemed to have lost the goddess, if they ever worshipped her at all. Hence the Norse call Easter 'Paskir'.
The name comes from the direction of the rising sun, Ost. Bonfires were lit at Easter. As when the sun rises on Easter Sunday morning, he gives three joyful leaps. Me, too. Water drawn on the Easter morning is holy and healing. It would be nice to know more about this goddess but the Medieval Christians thought these matters were not worth preserving. Pity really, I would like to know how the egg and the bunny fit in.
(image from Wikicommons)
Posted by The Red Witch at 6:59 AM

Egg was a very ancient symbol of renewed and never-ending life. Eggs, like rabbits and hares, are also fertility symbols . Since birds lay eggs and rabbits and hares give birth to large litters in the early spring, these became symbols of the rising fertility of the earth at the Vernal Equinox.

Rabbits and hares are both prolific breeders. The females can conceive a second litter of offspring while still pregnant with the first, hence the sayings, "to breed like bunnies" or "multiply like rabbits".

There's an interesting depiction of Eostre/Ostara in American Gods by Neil Gaiman. I can't imagine a male fertility god.

In Greek mythology, Priapos later latinized as Priapus, was a minor rustic fertility god, protector of livestock, fruit plants, gardens and male genitalia. Priapus was best noted for his large, permanent erection, which gave rise to the medical term priapism.

I think the various corn gods were fertility gods too requiring human sacrifice.
Some scholars were trying to connect the rabbits to the goddess as maybe the creatures that drew her carriage. Goddess have been known to use unusual animals for that.
American Gods sounds interesting. I like the idea that the old gods are like the fairies. They need people to believe in them to live. I do believe in Odin, I do, I do. :-)
I also like a holiday that involves bonfires and chocolate.

I've certainly heard of Priapus, anachronist!
It's just that most fertility gods do tend to be goddesses.

But does Odin believe in you?American Gods is an interesting book, Red Witch - very black humour, and extremely gross in places.

@But does Odin believe in you?

As for the bunny, Ostre/Ostara's patron animal was a rabbit. Legend has it that she came upon a bird who couldn't fly because its wings were frozen by snow. Out of guilt because she had been late that year (or because she'd taken him as a lover), she turned him into a rabbit. She gave him the ability to lay eggs once a year. One day she got mad at him and flung him up into heaven to be the constellation Lepus (The Hare), which is near Orion. Eventually she changed her mind and allowed him to return to earth once a year to give away his eggs to children who celebrated her festival.

Me, too. It reminds me of Luna. I wonder if making her patronus a rabbit was deliberate?

Maybe Luna's patronus was picked for the March Hare.