Alboin, King of the Langobards, part 5 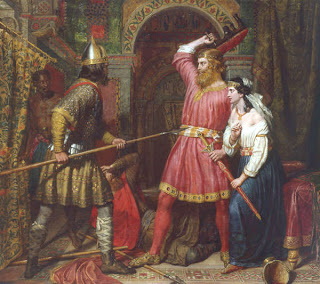 Chapter 28, the point at which Rosimund makes her move.
After he had ruled as king in Italy for three years and six months, he was slain by the plots of his wife. Moreover, this was the cause for his murder. When he was happily living near Verona, he stayed longer than was proper at a feast. He ordered the cup, that he had made from the head of his father in law, Cunimund, to be given to her and invited her to drink so that she could share a happy drink with her father. This did not seem impossible to him. I speak the truth in Christ. I myself have seen this cup on a certain feast day in the hand of Prince Ratchis who was showing it to his guests. When therefore, Rosimund considered the matter, deep sorrow was taking hold in her heart, which she was not able to restrain, so she burned to avenge the murder of her father in the death of her husband. Soon she entered into a plan with Helmichis, who was the king's squire, that is his shield-bearer, and had been Alboin's foster brother, so that he would kill the king. He persuaded the queen that Peredeo, who was a very strong man, would be included into this plan. Peredeo was unwilling to apply himself to this wicked accord with the queen's great urging. So she substituted herself one night in the bed of her maid, whom he was having this disgraceful habit with (sex); where Peredeo, coming to bed unaware of the change, had 'knowledge' of the queen. And when she succeeded at the wickedness she asked him whom he supposed her to be. And he named the name of his 'friend', whom he reckoned her to be. He was subdued by the queen who said, " I am not at all who you reckon, but I am Rosimund. Certainly now you have committed such a deed that either you kill Alboin or he will extinguish you with his sword." Then he, understanding the wrong he had committed, and he, who was unwilling, agreed to the murder of the king after he had been compelled in this way. Then, while Alboin gave himself over to a sleep in the middle of the day, Rosimund, after ordering a great silence in the palace and removing all arms, strongly bound his sword to the head of his bed so that he would not be able to draw it out. And, accordingly to Helmichis' plan, she, more cruel than all beasts, lead Peredeo, the killer, in.
Alboin, suddenly roused from his sleep, understanding the evil which threatened him, extended his hand quickly to his sword, which was so tightly bound that he was not able to draw it. However he took hold of a small footstool and defended himself with it for a while. But alas! What sorrow! This man who was very well suited to war and of the greatest daring was not prevailing against his enemy. He was killed as though he was of one lacking skill. He, who was very famous in war by the overthrow of so many enemies, perished by the conniving of his wife. His body was buried with the greatest of weeping and lamentation of the Langobards under a certain set of steps which was near the palace. For he was so great in stature and his body was well suited for the waging of war. This grave was opened in our days by Giselpert, who was the Duke of Vernona. He took the sword of Alboin and any other ornaments of his that had been found. Who, for this reason, was giving out to unlearned men with his usual vanity that he had seen Alboin.
tomorrow: the aftermath of the murder, ie what happens to Rosimund
image from Wiki commons
Posted by The Red Witch at 8:23 AM

Oh sure, Alboin was all sweetness and light, he just wanted his wife to have fun drinking from the cup made of the skull of her father, what cheer...and she killed him, more cruel than all beasts. And cheated on him. Wicked woman. ;)

LOL I know. But Paul did also condemn Peredeo for having a sweetie that he was having sex with.

Now other chroniclers don't tell this story about the skull and Paul does contain some inaccuracies, ie that Gunther was killed by Attila. So although it is in the guise of a history, it could very well be a soap opera.
However, nothing compares to the Merovingians for killer soap opera drama.