Alboin, King of the Langobards, part 4 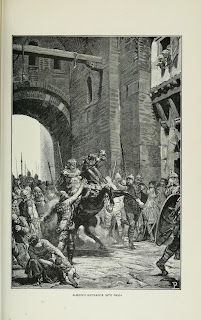 So Narses is dead and Alboin is continuing across Italy to solidify his position. He crossed the river Plavis and the Bishop Felix was able to get him to let the church keep all its stuff. Then Paul talks a little about Felix and Fortunatus before returning to Alboin. He took Vincentia, Verona, and the rest of the Venetian cities expect Padua, Monselice, and Mantua. Then Paul digresses a bit more on the Italian provinces before returning to Alboin again in Chapter 25. He entered the province of Liguria on the third day before the Nones of September and took all of their cities except the ones on the coast.
The city of Ticinum (Pavia) held out preferring a siege which lasted more than three years. The Langobard army was nearby on the west side, while Alboin continued on and invaded all the way to Tuscany, excluding Rome and Ravenna (a very difficult fortress to take) and some fortified towns that were along the coast. Following a famine and plague, there was not enough strength in the Romans to resist him. He brought many people with him into Italy.
"But after three years and several months of the city of Ticenum preferring to endure a siege, they then surrendered to Alboin and the Langobards, besieging them. When Alboin entered through that gate which is called Saint John from the eastern side of the city, his horse fell down in the middle of the gate and, although he urged it with spurs, although he cut it beating the horse with spears, it could not be raised up. Then one of those Langobards spoke to the king, in this way, saying: "Be mindful, Lord King, how you swore this oath. Break your harsh vow and you will enter the city. For truly, the people of this city are Christians." Indeed Alboin had vowed that , since they had been unwilling to surrender to him, that he would put the entire population to the sword. After he broke his vow by promising indulgence to the city, suddenly, with his horse getting up, he entered that city. Bearing them no harm, he kept his promise. Then all the people came running to him in the palace, which a certain king Theudericus had built. After such miseries, a spirit of hope began to lift confidence in the future.
tomorrow, Alboin gives Rosimund a reason to kill him, if she didn't have one already.
(picture from Wiki commons)
Posted by The Red Witch at 1:02 PM

It seems sometimes it is good to break one's word, isn't it? Rosimund should have killed him long ago.

What a sensitive horse.

Why do I get the impression that this spirit of hope isn't going to last?

@Rosimund should have killed him long ago

He probably didn't bother much with her. Her main value to him was to keep the remaining Gepids loyal to him.

@Why do I get the impression that this spirit of hope isn't going to last?

It wasn't so bad. :-) Italy was as well fought over as England had been.