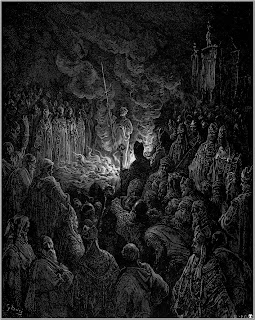 "He said that Peter stopped in the middle(Peter said that he paused to speak with Jesus who was in there with him) and carried on."

22 Therefore because the king's commandment was urgent, and the furnace exceeding hot, the flame of the fire slew those men that took up Shadrach, Meshach, and Abed'nego.

23 And these three men, Shadrach, Meshach, and Abed'nego, fell down bound into the midst of the burning fiery furnace.

24 Then Nebuchadnez'zar the king was astonished, and rose up in haste, and spake, and said unto his counselors, Did not we cast three men bound into the midst of the fire? They answered and said unto the king, True, O king.

25 He answered and said, Lo, I see four men loose, walking in the midst of the fire, and they have no hurt; and the form of the fourth is like the Son of God.

The fourth, according to most interpretations, is Christ.

As far as the lance goes, we all know what happened to Hitler after he lost it to Patton. :)

Do you have an opinion on which one was genuine? I forget where the Hapsburgs got theirs.

Peter Bartholomew was said to be illiterate and he was a layman so he would not have been permitted to know the contents of the Bible so well. Raymond of Aguilers wrote pages and pages of visions and miracles people were witnessing along the road to Jerusalem and there were all kinds of people who stepped forward with visions that corroborated Peter's story.

Actually I just took a look back at my earlier post on the lance. The Hapsburgs bought it from the Byzantines. Makes you wonder how many lances did the Emperor have and how much did he make selling them off?

Well, in some cases, the Hapsburgs are considered the descendants of the Jews who fled Jerusalem for refuge in France. The Merovingians and all that.

I guess you can draw your own conclusions. LOL

The Emperor probably had tons of "relics" he sold for a nice bit of cash. Helped along by people like Helena, who thought everything she found related to Christ or Mary.

Relics were a big business in the Middle Ages. Even now, they remain an object of attraction.

Raoul gave a very different description of the trial by fire. He wrote that there were two rows of woods set afire and that Peter had to walk between them for nine paces. Peter arrived on the other side burned and died the next day
That description certainly sounds the most likely.

I suppose all these lances were fakes.

@I suppose all these lances were fakes

Well the lances are but the nail on the Hapsburg lance has potential and the Vatican lance has never been tested. In fact, I don't know if it is ever shown to anyone.