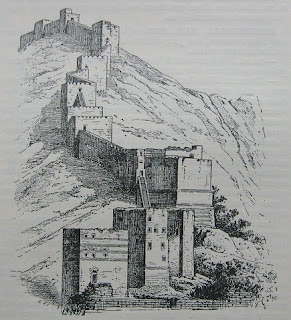 Position of the city. This city, Antioch of course, is very beautiful and respectable because within its walls are four very great mountains and very, very high. On the heights also a castle was wonderfully built and very strong. Below it and near at hand is the respectable city, with all respectable ornaments since there are many churches built there. The city contains 360 monasteries. The patriarch holds under his sway 153 bishops.
The city is closed in by two walls. The greater wall is very high and wonderfully wide, and made of great stones; on which 450 towers are arranged. By all means, it is a beautiful city. On the east, it is closed in by the four great mountains. On the west, the other side, a certain river, which is called the Farfar, flows by the walls of the city. This city has great prestige. For, beforehand it was ruled by a succession of 75 kings, of which dynasty the head was King Antiochus, from whom it was named Antioch. The Franks held this city in siege for 8 months and 1 day. Afterwards they were locked up inside the city for three months by the Turks and from other pagans, who made up the greater number of men, either of Christians or pagans. However once, by the aid of God and the Sacred Sepulcher, these had been defeated by the Christians of God, we rested with joy and great cheer in Antioch for 5 months and 8 days.
Anonymous must be bored, waiting around for the Crusaders to get moving. Raymond of Aguilers, amusingly to me, writes that Bohemond drove his boss the Count of St. Giles away from the citadel saying that he promised the emir that he would hold it. After all, they all promised whoever could take the city could keep it and he did. The Count, because he was ill, real or faked, stayed behind on the day of the sortie which is why he got to be in front of the citadel, he was clearly trying to grab it for himself but was having difficulty out-weaseling the head weasel.(weasel appears to have been one of the nicknames of Bohemond's father) It appears Bohemond and Raymond (the Count) were cousins by marriage, although Bohemond's cousin Matilda must have died since the Count was on his third wife, Elvira, at the time of the Crusade. When you start looking at the families of the Crusaders, Bohemond was related to quite a few of them.
Posted by The Red Witch at 8:12 AM

When you start looking at the families of the Crusaders, Bohemond was related to quite a few of them.
Nepotism - you can't beat it :)
So the first crusade is almost a huge family endeavour.

I love the picture at the top.

Considering European nobility were all related to each other, yeah. Those who had few prospects or hadn't been excommunicated for bad behavior went.
It is a nice picture. I don't know who drew it but it is supposed to be the wall of Antioch.