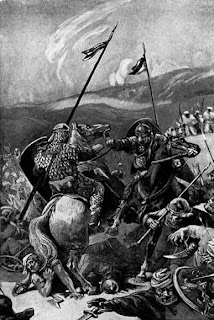 Gustave Dore made a number of really nice illustrations for some book on the Crusades
It is an excellent illustration. I take it the one you featured previously is by the same artist?

The previous illustration was by Gustave Dore too. It was on the fall of Antioch. I love his Paradise Lost illustrations, they are the best. I saved a few more for future posts as they liven up the page a bit.

What do you make of the celestial army?