I visited the Nancy Island Museum this summer. It is the 200th anniversary of the burning of the HMS Nancy in the Nottawasaga River. I did not go for any of the historical re-enactments because the truth is stretched far too much in those re-enactments to make me happy. It is rather like trying to get me to say the Lord of the Rings trilogy on film is a great adaptation of the novels. I think my head might explode.
It seemed to me that the museum displays could use a little updating and fact checking but most annoying of all is this stamp that is only available at Nancy Island, depicting Miller Worsley, the Commander of the Nancy. 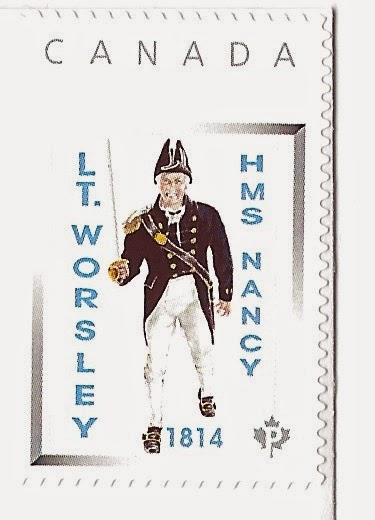 There are other things I find objectionable about the image but worst of all and least excusable is the grey hair. Worsley was 23 years old when he took command of the Nancy. He died at the rather young age of 43. It is doubtful that he ever looked this old. The vigorous young man who rowed across Lake Huron with supplies and who lead a daring attack on two American warships in those same rowboats is not this guy. He looks like he is some crazy old guy scaring teenagers off his front lawn. Grrrrr, indeed.
At 23, Worsley was an 11 year veteran of the Napoleonic Wars. He was a veteran of the Battle of Trafalgar at the age of 14. He was credited with having genial manners and self discipline and I have never pictured him as this snarling old fart.
Posted by The Red Witch at 6:09 PM

An ugly stamp with a lazy design. Typical from Canada Post. At least they didn't commission children to design it.

Children might have done a better job. I did ask the attendant at the door why he had been depicted so old and she said perhaps people would have trouble believing someone so young could be the captain of a ship. I didn't think museums were in the business of fulfilling people's expectations but there were a number of rather simple and sloppy errors in the museum's displays so the artist probably never checked his age.