I always knew about Holy Trinity Church, an old church that survived the building of the Eaton Centre in downtown Toronto by being incorporated into the plans. The centre went up and the church was preserved where it stood but it is close to the walls of the mall. The Toronto library has some amazing photos of the church including one that shows the little cluster of buildings and a huge pit where the mall foundations were going.
It was on a trip to a washroom that I passed by the doors that lead to the church and I noticed a house right up against the walls of the centre. So, I took a closer look and noticed the name on the plaque: Henry Scadding's house. I knew he had been the author of Toronto of Old and the founder of the York Pioneers, plus his father's log cabin is preserved at the CNE grounds but I had no idea his house had been saved. I also did not realize that he was the first pastor assigned to Holy Trinity by Bishop Strachan, the man who negotiated a surrender to the Americans when York was overrun on April 27, 1813. Scadding was a member of the Family Compact that ruled Upper Canada until William Lyon Mackenzie's rebellion caused Victoria to send Lord Durham to discover why there was unrest in the colony. He recommended greater self rule which gave us our first combined Canadas parliament.
Here is a photo that I took with my cell phone of the house, Henry lived in: 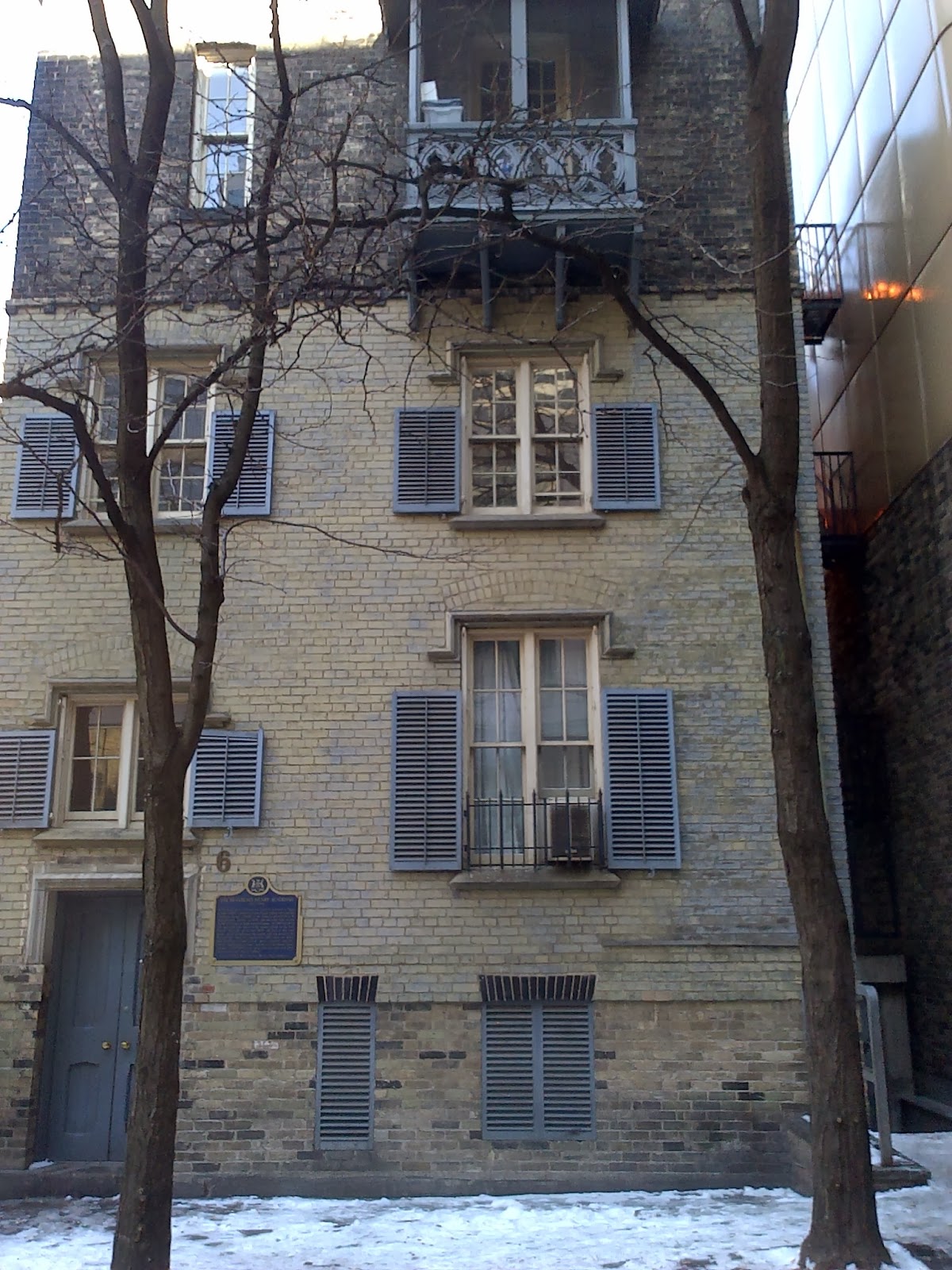 In his book on Toronto (1873), Henry wrote that the land had belonged to Dr. Macaulay and that Albert Street which entered Yonge Street was in 1833 know as Macaulay Lane and the area was still all fields.  Toronto, at the time, was actually a little east of Yonge Street, nearer to the Don River. The place that Macaulay's homestead occupied is now Trinity Square. Even as Scadding was writing, he said that the area was now surrounded by buildings, although from his attic he could still catch a glimpse of Lake Ontario to the south and the still green and untouched Yorkville area to the north.
He wrote that the church was a gift of benevolence from two sisters in England to Canada. They made their gift anonymously to Bishop Strachan with the proviso that the pews are free and therefore the first pastor had to have means of his own. Henry lamented the loss of the fine trees that had lined Yonge Street along Macaulay's estate, victims of 'progess' and development.
The church rectory has also survived development which is beautiful to see. It looks like an island of tranquility in a busy, busy place and a little pocket of historical Toronto, obliterated almost everywhere else. I can just imagine the battle the historical groups had to save the place. 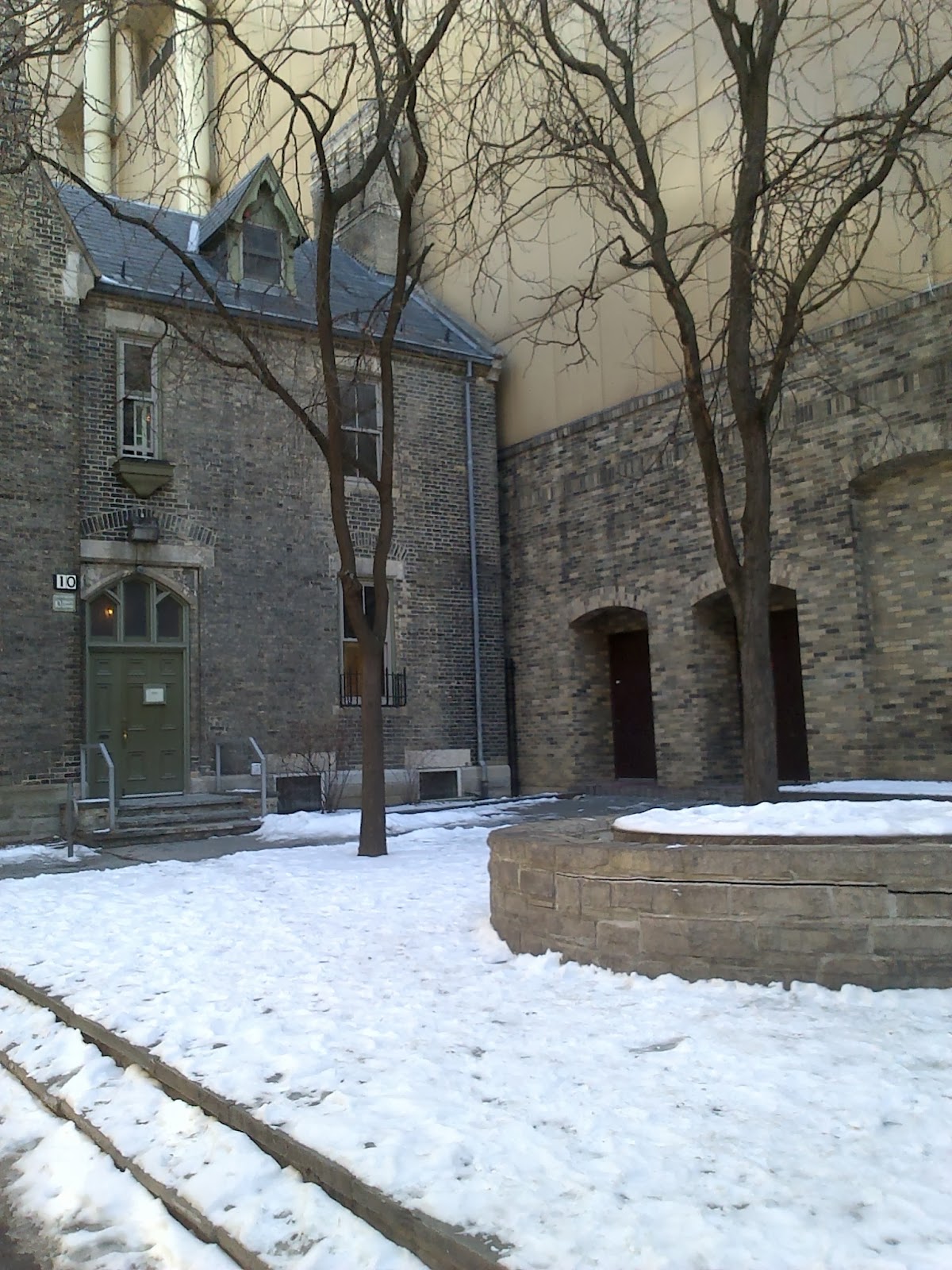 I expect this place is an oasis in the summer. Notice the address on the rectory is 10 Trinity Place. Judging from the preface to Scadding's book, this is where he wrote it. I do not know when he built the other house, which now houses not for profit organizations.
There are many photos on the net of Holy Trinity Church but I will add one of my own. I thought the interior was worth seeing. Yes it is a small church and doesn't have the feel of antiquity like Notre Dame or other medieval churches but it was delightful to me. 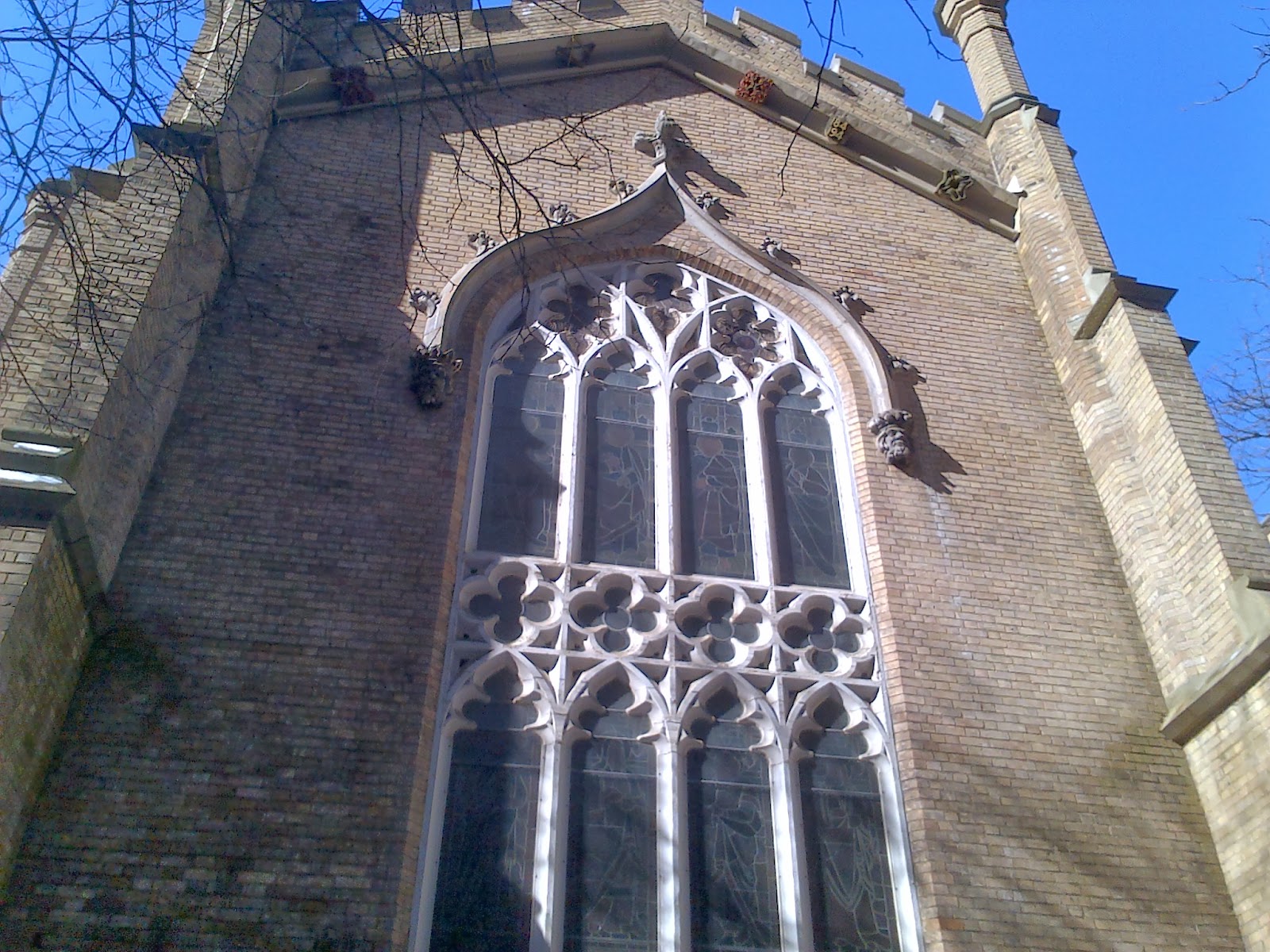 I tried to take a good photo of the faces in stone here. This window is directly behind the altar. Unfortunately the good doctor did not say whose faces these two kings represented.
If you ever do stop in and have a look at the church, please put a few dollars in the donation box at the front for the maintaining of the space. I did.
Posted by The Red Witch at 11:45 AM