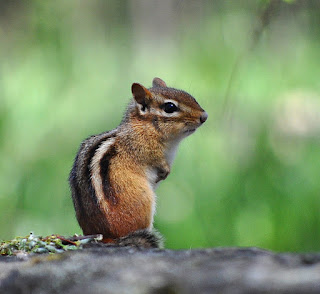 How sad for anyone living in Europe. As amusing as the antics of squirrels can be, the chipmunk is far, far cuter than he. I looked up the etymology of the word 'chipmunk' in the OED and they do not know. There is a suggestion from someone or thing called Bartlett that it is a aborigine word but the OED writers thought it was an English compound.
So I went to Wikipedia because, as a resource, it is far better than it is given credit for. They state that the chipmunk is a type of North American squirrel. They quote a Concise Dictionary of Minnesota Ojibwe by John D. Nichols and Earl Nyholm. (How interesting that such a thing exists and I don't have one!) Their etymology is that it came from the Ottawa word jidmoonh, meaning 'red squirrel. (Ojibwe, ajidamoo) Chalk one up for Wikipedia!
Because they are so adorable, I am going to post a picture of one taken from Wikipedia.
Add: After logging off I decided to check this dictionary of Minnesota Ojibwe. It exists but it lists agongos as the word for 'chipmunk'. Looks like they called Scandinavian people 'chipmunks' too. There is an Eastern Ojibwa-Chippewa-Ottawa Dictionary by Richard A. Rhodes that gives gwiingsenh as the word for chipmunk. Well, whoever wrote the Wiki entry did not properly cite that reference and searching google books as well as a general search does not reveal any book where that may have come from; everyone just quotes the Wikipedia article. That does not mean it is wrong but cannot be viewed as gospel without more information.
One more time: It started to annoy me. Why did they say that? So I did a bit more searching. Whatever I could do from home. I found an article on "The Significations of Certain Algonquian Animal Names" in American Anthropologist from 1901 by Alexander F. Chamberlain which give the Algonquin name for chipmunk as lênâpé pochwapiith or "he who sits upright on something". Appropriate and in the Cambridge History of the English Language, John Algeo ed., 1991, I found an article on Canadian English (did not know there was such a thing) by Laurel J. Brinton and Margery Fee and they wrote that the word chipmunk came from the Ojibwe. From here the trail runs cold, unless I want to go to the university library and I am not feeling that energetic.
Posted by The Red Witch at 8:27 AM

Should I move to Canada to watch these cuties?

Absolutely! Creatures like raccoons and skunks are just the rats going through my garbage but, in other parts of the world, they are as exotic as kangaroos and platypuses are to me. And chipmunks will take peanuts from your hand.

And chipmunks will take peanuts from your hand.

Awww...I think I should start packing my bags.

You should! Canada is a huge country. It must be seen by road trip, that way you get the full impact of how huge. Or by train. Don't just come for the chipmunks, come for the poutine! :-)