The Helm of Awe 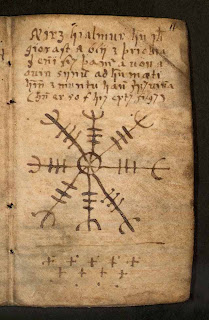 More because I haven't posted in a few days than for any other reason, I am going to blog about my theories on the Helm of Awe. It is an item that Sigurd, the Volsung, took from Fafnir after he killed him. Most scholars translate it as a 'helmet' but it is also a rune that Viking sailors used to tattoo themselves with for protection. Although, most of the information you will find on the internet is what could be called 'speculative' rather than being 'academic', there is a book by Terisa Green called The Tattoo Encyclopedia in which Green, an archeologist, shows the tattoo as being of ancient origins.
Perhaps it is translated as a 'helmet' because Sigurd's German counterpart Siegfried has a 'tarnkappe' which is normally translated as a 'cloak of invisibility' in spite of the fact that 'kappe' can also be translated as 'helm'. When Siegfried is wrestling Brunhilde, it seems to me that a head covering would stay on better than a cloak. Even more so, when Siegfried is trying to win Brunhilde for Gunther and is throwing things and trying to make it appear as though it is Gunther doing it. This would be harder to accomplish swathed in a cloak.
We are expected to suspend disbelief but, if there is a way to translate these words that aren't so contrary to logic, why not use them. Are scholars saying that people in the 12th century were any less logical than ourselves?
Sigurd did not seem to have the covering that made him invincible like Siegfried but I question that. If he acquired this rune from the dragon, then he did possess invincibility, he just didn't use it.
image of the aegishjalmr courtesy of Scandinavian Wikipedia
Posted by The Red Witch at 8:40 AM

A nice design by the way!

I suppose you are closer to the truth - it must have been a helm, a hat or a hood of a kind, far more logical and convenient. In Greek mythology such a hat exists too - Perseus used it fighting the Medusa. People in the 12th century were NOT less logical than us.

Muller in 'Rules of the Endgame" says the same - that they weren't less concerned about logic than we are.
I thought the writer of The Nibelungenlied was heavily influenced by Greek and Roman myth so the helm of invisibility makes sense when you consider Perseus borrowed it from Hades.

If Sigurd's covering is usually translated as helmet then yes, it would make sense that Siegfried's is more likely to be a helmet too.

I found this in Wiki:

"In classical mythology, the Cap of Invisibility (Ἄϊδος κυνέην (H)aidos kuneēn in Greek, lit. dog-skin of Hades) is a helmet or cap that can turn the wearer invisible. It is also known as the Cap of Hades, Helm of Hades, or Helm of Darkness. Wearers of the cap in Greek myths include the goddess of wisdom Athena, the messenger god Hermes, and the hero Perseus. The Cap of Invisibility enables the user to hide from the eyes of other supernatural beings, functioning much like the cloud or mist that the gods surround themselves in to become undetectable."

So no need to envelop yourself in a cap or cloak.

What about the rune or tattoo aspect of it?

Funny how these things crop up in literature and myth even now. The Mantle of Arthur is one of the Thirteen Treasures, and Caswallawn murders Caradoc while wearing an invisibility cloak. There are the elven cloaks in LOTR, not to mention HP. Manannan mac Lir and his cloak of invisibility, and the Faeth Fiada of the Tuatha de Danann.The mist around the Isle of Man is still called Manannan's Cloak. Diarmid and even St. Patrick possessed the ability as well.

@What about the rune or tattoo aspect of it?

According the the Tattoo Encyclopedia, viking sailors would get tattoos like this before a trip for protection.