The later Middle Ages have not been the era that interests me the most. I am more interested in the Age of Heroes, the time of the Great Migration, i.e. early Middle Ages, when King Arthur and Beowulf lived. I understand people's greater interest in the later period because there is more to know, more chronicles that survived, there was more written literature.
I was interested in what Terry Jones wrote about Richard II and Henry of Bolingbroke and looked a little further afield for information about their conflict. Was Richard such a terrible unpopular king? Did Henry IV and his sidekick Arundel truly wipe any positive accounts of Richard from the record?  One issue with that is 'he who laughs last laughs loudest' and Henry IV did not have the last word on Richard. His son, Henry V, who had been fostered by Richard II and felt a great affection for him, little for his father and none for Arundel had the last word. Therefore, it could be that Henry V, who had quarreled with Arundel over power when his father became increasingly incapacitated by illness, who left a portrait of Arundel in the historical record that was more cruel and despotic than he was in actual fact and he could have easily corrected any and all accounts that were unkind to Richard II. As well, since he was friends with and second cousin to Thomas Chaucer (who scholars agree was Chaucer's son) if Chaucer had been murdered for being part of Richard's regime by Henry IV or killed as a heretic by Arundel, this would be an opportunity to rehabilitate him as well.
In her book A Distant Mirror, a book on the 14th Century and the Hundred Years War, Barbara Tuchman wrote that Richard wanted to marry the daughter of the King of France in an effort to end the war which he had no use for and called 'intolerable'. She added that he did not share his countrymen's animosity towards the French. If he was not always a great king, she wrote that "Kingship, which can corrupt or improve, seems to have had a generally one-sided effect in the 14th century: only Charles V gained wisdom from responsibility." (pg. 533) She concluded by saying that historians debate if Richard was mentally ill but that this is a modern view of a "malfunction common to 14th century rulers: the inability to inhibit impulse."
Terry Jones also wrote that Richard tacitly allowed Lollardy to flourish during his reign but Tuchman wrote that, following the Twelve Conclusions nailed by Lollards to the doors of St. Pauls and Westminster Abbey, Richard II came home from Ireland where he was campaigning 'to enforce new measures of suppression'. In a fury he threatened to kill Sir Richard Stury, who supported the Wycliffian proposal for reforms in the House of Commons, by the 'foulest death that may be'. So far be it from looking the other way, Richard defended traditional Catholicism although Tuchman adds that the Conclusions did make their way into his wife's entourage where they found some sort of welcome.
Although Jones was correct, Richard's efforts to end the Hundred Years War and make peace with France was very unwelcome by his barons and this formed a part of the movement to usurp him.
One thing that was left out of Jones' book (and I wish it had not been) was the account in Holinshed's chronicle that Richard II had not starved to death (as most scholars now believe) but had been murdered according to Henry IV's wish by a Sir Piers Exton. This fact showed itself in Shakespeare's play Henry IV. Shakespeare showed Richard as an intellectual king, which perhaps influenced Jones' perception of Richard.  It is William Caxton who wrote that Richard II had starved to death at Pontrefact Castle because the Percys accused Henry IV of having starved him intentionally. Holished may have gotten his alternate history from chronicler, contemporary to Richard, called Jean Creton or the  anonymous writer of Chronicque de la Traison et Mort de Richart Deux, Roy Dengleterre. His body had been exhumed in 1871 by Dean Stanley of Westminster, and it was noted that there were no marks of violence on his body or head. The director of the National Portrait Gallery, Sir George Scharf, was present and made sketch's of the king's skull, which you can see here. 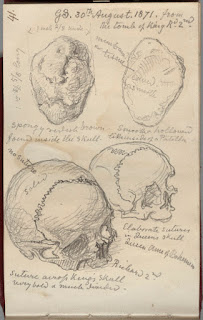 an account of the recent discovery of this sketch can be found here at the National Portrait Gallery site.
What may have lead to the story of Richard's murder may have been that Henry, who was plagued with some disfiguring disease that may or may not have been leprosy, had been buried at Canterbury Cathedral near the tomb of Thomas Beckett, in hopes that the saint could intercede for him with God so that Henry could go to heaven, in spite of usurping the throne and having caused his cousin's death.
Thomas Beckett, as you well know, had been murdered by knights who were acting on Henry II's exasperated cry of "Will no one rid me of this meddlesome priest." Henry IV is said to have uttered similar words which cause Exton to depart with eight other men and chop Richard's head off while Richard defended himself manfully with a knife. Similar tales.
I wonder why Jones did not include more of this in his book since he was discussing the death of Richard II and how the new regime pursued his supporters. This would have been better than all those flights of fancy. I suppose I should offer up some theory as to how Chaucer died. That will be my next post.
Posted by The Red Witch at 10:07 AM

Was Richard such a terrible unpopular king?

I really don't think so but certainly he suffered from a kind of personality disorder. Schizophrenia?

I suppose I should offer up some theory as to how Chaucer died. That will be my next post.

I can hardly wait!

Thank you and it really is not a full treatment of the subject but, as there are many books written about Richard II and Henry IV, one need not look far afield for more info.
I think Richard was justifiably paranoid. Sometimes everyone really is out to get you. He lived his whole life with the sword of Damocles.
I hope I shall not disappoint. :-)