The Butterfly and a Princess of Troy 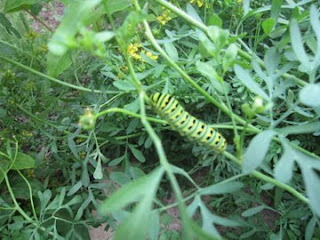 Several years ago, I planted what is supposed to be an annual in the Canadian climate but, if left alone, will grow back year after year. That is: Rue. It is referred to in Shakespeare for its second meaning of 'regret'. It is also effective against basilisks, which is why I planted it. If the basilisks ever attack, I am set.
But now, I have discovered that Rue is also a host plant for the Papilio polyxenes butterfly, aka Eastern Black Swallowtail, Parsley Swallowtail, Parsnip Swallowtail, etc.. I was weeding away and discovered this delightful fellow. I normally find them on my carrots but I did not plant any this year. While looking up the name of the butterfly so that I do not identify it incorrectly, I noticed the species name and wondered what Polyxena has to do with this butterfly.
The 'papilio' element of the name is easy enough, it is Latin for 'butterfly'. Somehow Swallowtails managed to be 'the butterfly'. For species names, there are two elements, usually both latin. The first element tells the genus and the second element gives you the subspecies. Linnaeus was credited with first assigning latin names to all species as common names differ from place to place but he chose names that related to the attributes of the individual flora or fauna. Such as Cyancita Cristata, which is the species name for a Blue Jay and means 'little blue crested', but this system was changed so that species would be grouped together by genus. For example, Quercus alba means 'white oak' or Quercus rubra, which means 'red oak'. All oak trees start with 'quercus' as part of their name.
One of Linnaeus's students was a Danish man named Johan Christian Fabricius and he started to change the system to what it is today. He also named our butterfly in 1775. He was in the habit of travelling to England to study specimens that had been collected here. The first one he saw was likely collected near Lachine, which is near Montreal, possibly by a Dr. Barnston if I am reading the catalogue correctly. Originally he called it Papilio polyxenes but then in 1787, he called it Papilio Asterias, which it is sometimes called, referring it to Drury's collection and saying they were synonymous. He also wrote that it was a close relative of Papilio troilo, which explains the name 'Polyxenes'.
Polyxene means 'many foreigners', as poly means 'many' or 'much', and xene is 'foreigner' (like xenophobia, fear of foreigners) and so clearly has nothing to do with the attributes of the butterfly. Polyxena was a daughter of Priam. You will not find her in Homer's Iliad because it ends with Hector's funeral and she was caught up in the story of Achilles' death. Achilles surprised her and her brother Troilus (the Troilus of Troilus and Criseyde by Chaucer fame and Troilus and Cressida of Shakespeare) at a water fountain, where he killed Troilus and fell in love with her. He demanded her in marriage from her father and she was given to Achilles in exchange for the body of Hector. She was also able to persuade Achilles to reveal to her his one vulnerable spot which she then was able to relate to Paris (aka Alexander) so that he could kill Achilles. This clearly has nothing to do with the North American butterfly but I did notice that Fabricius used a lot of names from the Iliad and other Greek sources for names and since Polyxena and Troilus go together, so do the butterflies. It would have been nicer if he would have named as many of the new Swallowtails after Priam's children since there were so many and it would have made their naming consistent with each other.
Posted by The Red Witch at 8:35 AM

It is also effective against basilisks, which is why I planted it. If the basilisks ever attack, I am set.

Oh dear, that cracked me up! There is nothing better than being prepared for every circumstance! I love butterflies as well but their caterpillars are real monsters, hungry all the time.

Butterfly larva never seem to eat so much that they kill the host plant. It is moths that are voracious.