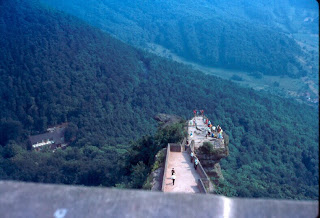 When Richard I was returning to England from the Crusades, he was delayed en route, having been captured by Duke Leopold and held prisoner for a couple of years by Holy Roman Emperor for ransom. Just yesterday, I spotted the name of one of the castles where he was held - Trifels in Germany. I have been there. He spent three weeks at Trifels in 1193. At the age of six, I was dangled over the cliffs, that the castle is perched on, by my uncle who thought it would be amusing to make my mother scream. Trifels is German for 'three cliffs'.
I do not remember much about the castle beyond that since I snuck off to the pub with my father and missed the tour of the tower. Of course at six, I would not have known or cared who Richard I was but, if someone would have mentioned Robin Hood, I might have gotten excited. Anyhow, here is a photo of the area I was dangled over. It is the farthest part with the chain link fence and I have to wonder if anyone ever dangled Richard I over that edge. I am sure he would have found it exhilarating. I was fortunate to have the presence of mind not to struggle in my uncle's arms or I might not have been here to write this blog for you.
Some worthwhile links: more photos and some info.
Posted by The Red Witch at 9:19 AM

I'd have screamed my head off. LOL I hate heights. On the other hand, the scenery is beautiful, isn't it?

It is. Have you looked at the photos in the link? The aerial one really shows you why I was petrified with fear.

Stunning pictures and a nice medieval castle - I would love to visit it (but not being dangled over!)

Your uncle was lucky nothing had happened to you.

@Your uncle was lucky nothing had happened to you.

Yeah, he was always the big joker. He was everyone's, including my, favorite uncle.

It's always uncles who do stupid things like that - seems to be part of their job description!

It certainly looks like a forbidding castle, pretty impregnable. (The one I lived in for two years is a bit cuddlier-looking than that one :) )

Tracy please do write something about your castle-living experience in your blog!

It's not remotely book-related, though!

Well, you can always make it book-related, though. It's enough to review a ghotic romance ;)

'I Capture The Castle' or 'Ghost' - it's where I met my partner.
And it gave me the creeps being outside on my own at night - when working late I had to lock up the little door inside the huge castle doors (they were already locked) - and I always felt as though I was being stared at, and I would never linger but got back inside PDQ, even though normally I loved to stargaze/watch the lights of the boats in the harbour/watch the lighthouse - but not in that location. After I'd been there a few months I discovered that there had been sighting(s) of a ghostly apparition disappearing into the alcove where the old winding mechanism for the drawbridge was, which was the area I really hated walking past because the sense of being stared at was incredibly strong at that point.

Is that why you went grey so young in life? :-P

We used to roast Stay-Puft marshmallows by the fire at Camp Waconda.