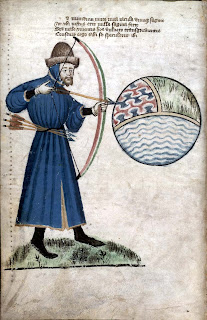 John Gower is an author from the 14th century who has been largely forgotten by modern readers. I doubt there are any books, that he wrote currently in print, but Google Books carries a few of them to read online. He was a friend to Geoffrey Chaucer. The Man of Law is thought to be modeled on him since he refers to Gower's story of Apollonius of Tyre in the prologue and the Man of Law's tale is based on one of Gower's stories from Confessio Amantis, Book III. Gower is thought to have been a lawyer.
Gower lived through the arrival of bubonic plague to England in 1348 and the Hundred Years War. He witnessed the Peasants' Revolt, the turmoil of Richard II's reign and his subsequent deposal by Henry IV. Gower wrote Cronica Tripertita about the turbulence of Richard's reign and justifying Henry's usurption of the throne.
If it sounds a little like Milton's Eikonoklastes, you would not wrong to compare the two. Gower has quite a bit in common with Milton: he went blind, he wrote about Biblical themes in English and in Latin (although Gower also wrote in French), they both are unique in writing about Sin being the daughter of Lucifer and Death being the child they created together. Gower precedes Milton by 300 years.
His works include, Speculum Hominis or Mirour de 'omme, Vox Clamantis, Confessio Amantis, Traitie, Cikante Balades, Cronica Tripertita, In Praise of Peace. When I get a chance to do some recreational reading, I will try to post more about him since he truly is an interesting fellow.
Posted by The Red Witch at 9:06 AM

He sounds like a fascinating character, and yes, one I'm definitely not familiar with.

Honestly, I think the stuff he wrote about Richard II sounds very interesting. I am not sure Confessio Amantis has aged well. It is rather like Le Roman de la Rose. Who reads that anymore besides Medievalists?

I've just finished reading The Time Traveller's Guide to Medieval England and the author lists the top four medieval writers near the end of the book - the first one listed is John Gower.

He was very important for centuries. Ben Jonson revered him. Thomas Warton wrote as late as 1774 "If Chaucer had not existed, the compositions of John Gower ....would alone have been sufficient to rescue the reigns of Edward III and Richard II from the imputation of barbarism.